Weekend Event Attracts Diverse Fleet of 23 Hood-Designed Yachts Original Post Appeared on DesignerSeries.org Bristol (R.I.)  August 3, 2017 – The Designer Series Rendezvous, a new annual event to honor yacht designers, kicked off with a weekend of festivities July 21-23, 2017 on the shores of Bristol, Rhode Island, at the Herreshoff Marine Museum. With […]

Bristol (R.I.)  August 3, 2017 – The Designer Series Rendezvous, a new annual event to honor yacht designers, kicked off with a weekend of festivities July 21-23, 2017 on the shores of Bristol, Rhode Island, at the Herreshoff Marine Museum. With 23 boats represented, owners, their guests and the public celebrated the legacy of renowned yacht designer, sail maker and America’s Cup champion Ted Hood.

The Friday-night kick-off, an “Open Boat” cocktail party, drew guests aboard twelve of the attending Hood yachts, including the 12-meter Nefertiti, Hood’s first America’s Cup design; the original Robin, the 1959 40-foot sloop credited with launching Hood’s design career; and the luxurious 116-foot Whisper, one of the last boats created by the Ted Hood Design Group. Many of Hood’s iconic Bristol Yachts and Little Harbors were also on hand to welcome everyone–from new owners such as Gene and Gay Berardi on their Little Harbor 70 Mach Buster and Ted’s daughter Nancy Hood-MacLeod and her husband Norm MacLeod on their new Bristol 47.7 Dunvegan, to veteran cruisers and racers on Little Harbor 60 Beau Geste and Bristol 35.5C Haff Tail. “The opportunity to board all the different Hood designs and talk to the owners and crew of the yachts was so unique,” said Bob Alberhasky, owner of Little Harbor 75 Kahuna. Alberhasky could not bring his yacht to the event but flew up from his home in Georgia to be part of the weekend. 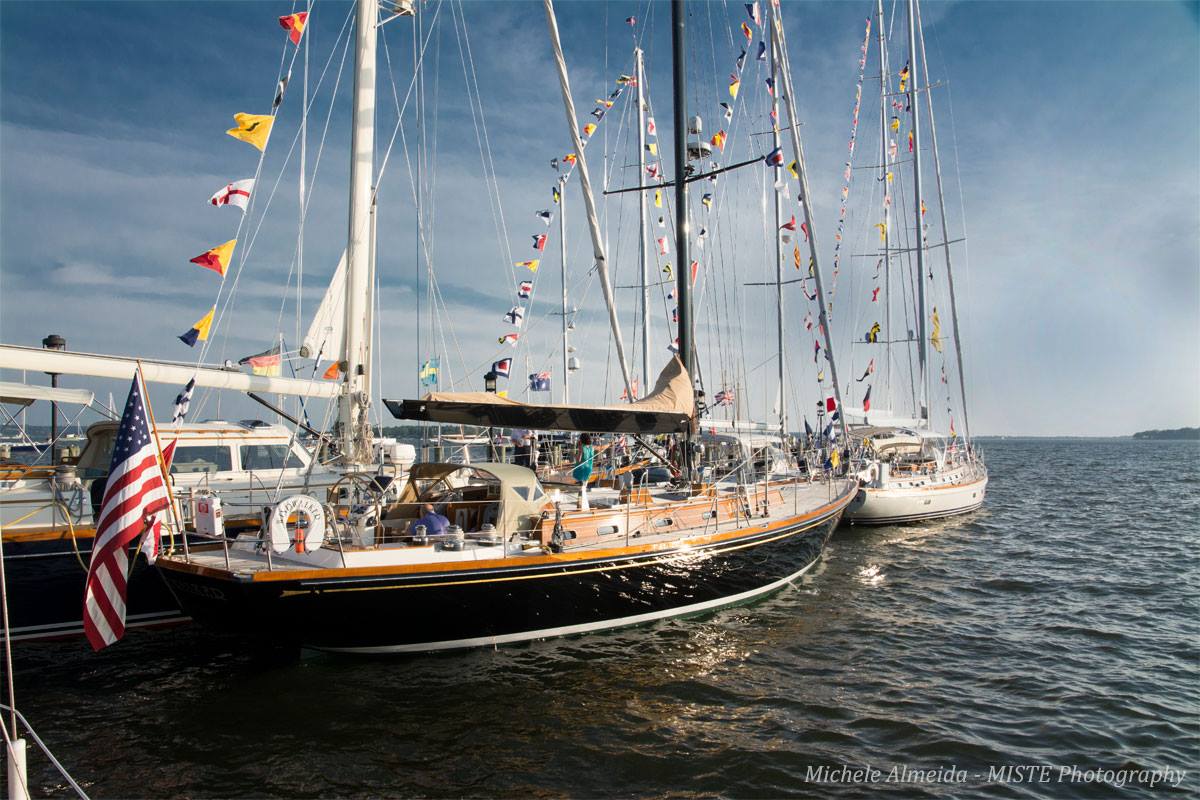 On Saturday, owners threw off the dock lines after a wind delay to compete in a race around Hog Island. The hot summer day caused the sea breeze to fill later in the afternoon, so the pursuit course was modified on the fly by Ted Hood’s grandson, Alex Hood, to accommodate the racers.

“I think big Ted was breathing down on us when the last race delay was coming to a close and the wind filled in just in time,” said Ted Hood Jr., Alex’s father. 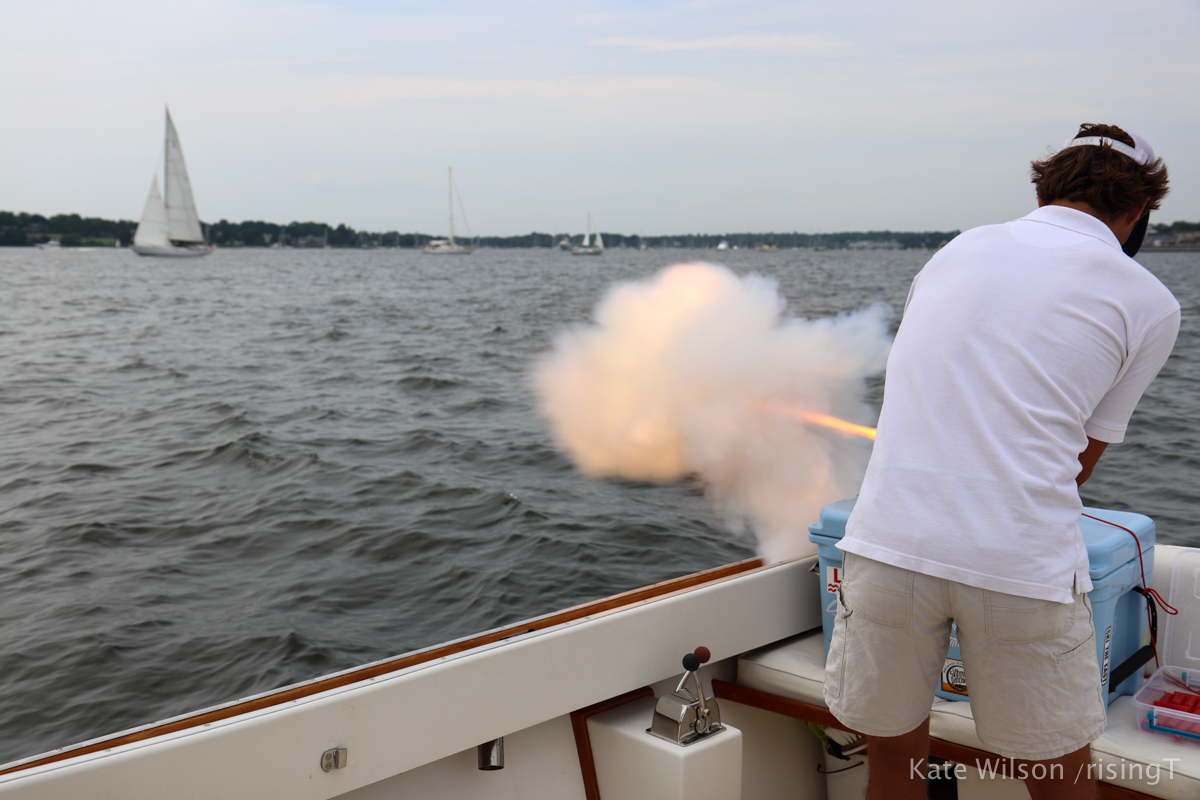 Photo: Alex Hood, grandson of Ted Hood and PRO, fires the cannon for a finisher with  Nefertiti, the 12-meter, in the background.

Nefertiti, crewed entirely by Hood-design owners who could not bring their boats to the event, started last and finished first in the five-mile race. She was followed by Windwalker, a 60-foot Lyman Morse/Hood design owned by Dan Levangie with Ted Hood Jr. as crew. Third place went to Beau Geste, skippered by long time Ted Hood colleagues Andy Tyska and Matt Smith, followed by the Little Harbor 52 High Cotton and Mach Buster. A special recognition was awarded to Dunvegan–crewed by Ted Hood’s other two children, Bob and Nancy–which started the closest to their designated start time. 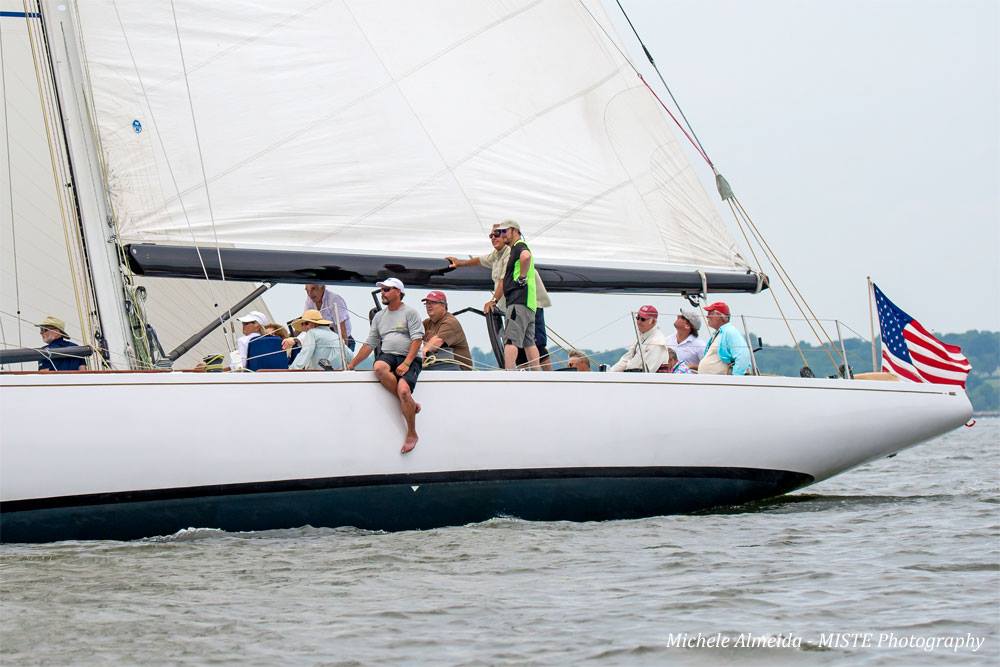 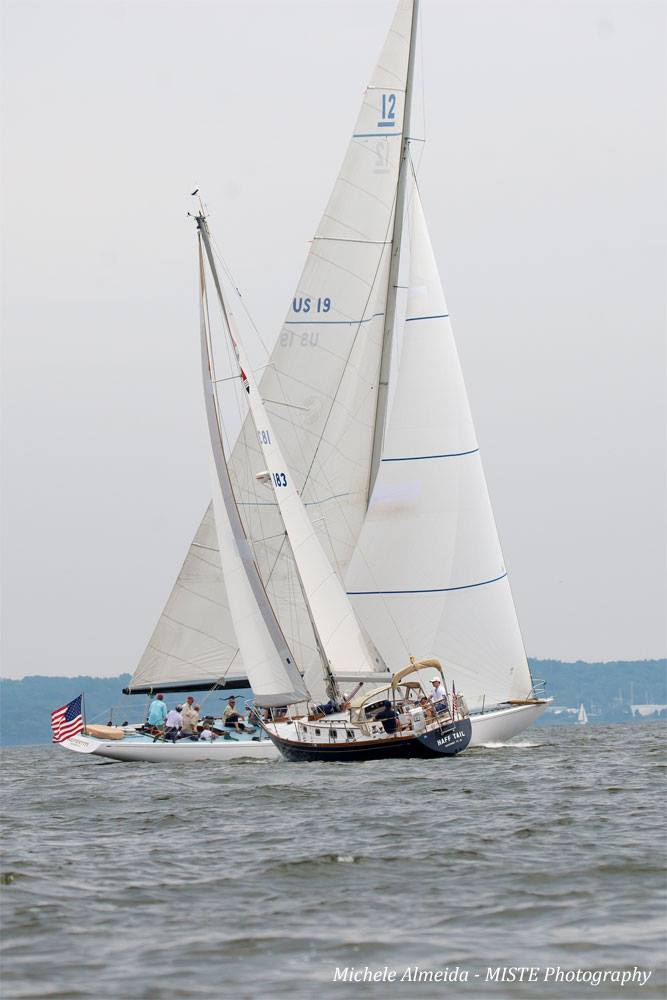 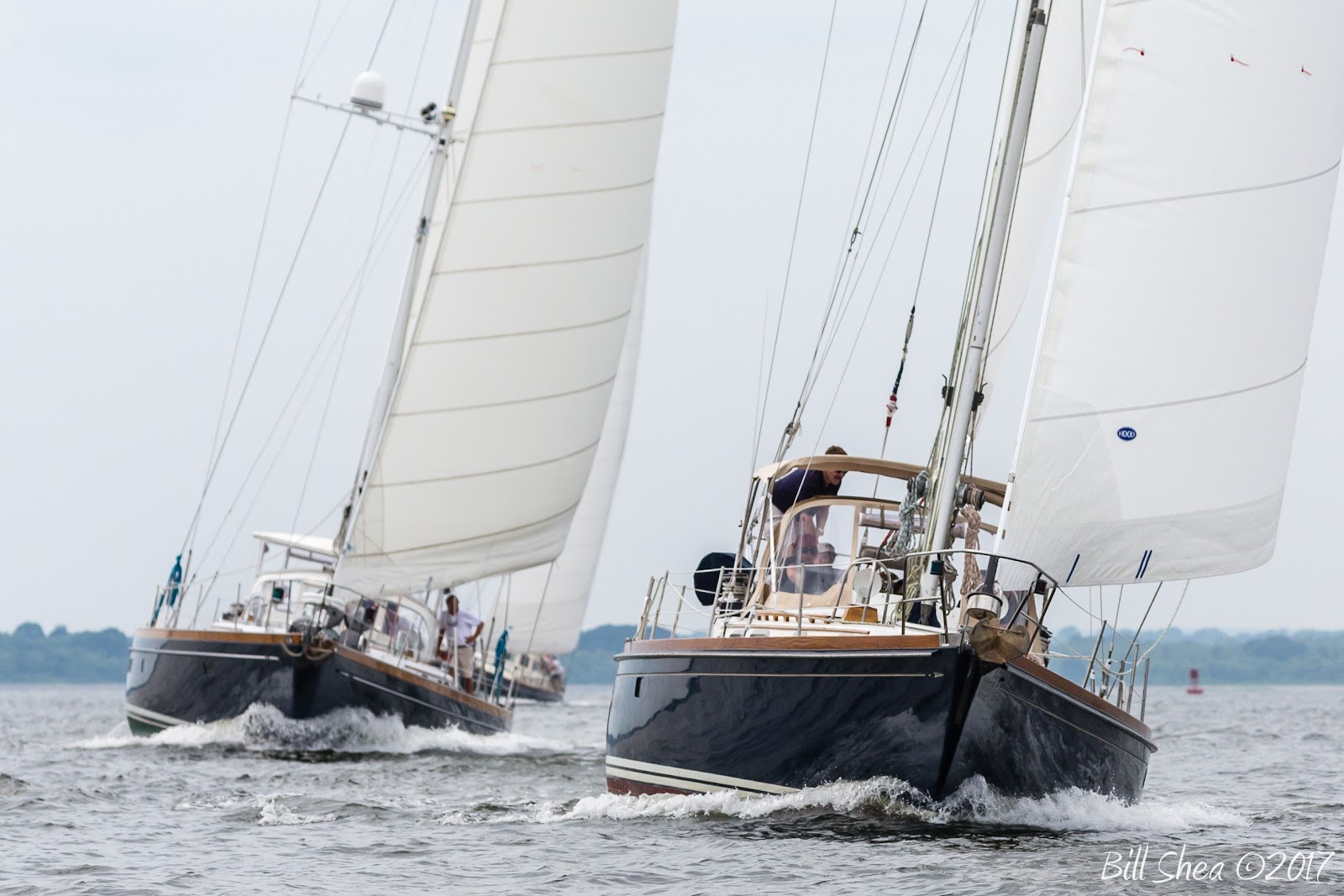 Saturday evening under the tent, participating sailors and their friends continued the celebration with a clambake. After awards, including a raffle from Hood Sailmakers for a sail repair kit won by the 51-foot Hood yawl Arawak, Ted Hood Jr. led a panel of former Hood Design employees to share stories of working with the man known to speak few words. Ally Maloney, Matt Smith, and Ted Fontaine swapped tales of inspiration and humor of working with Ted Hood.  All four of the panelists now have successful companies of their own in yachting design. 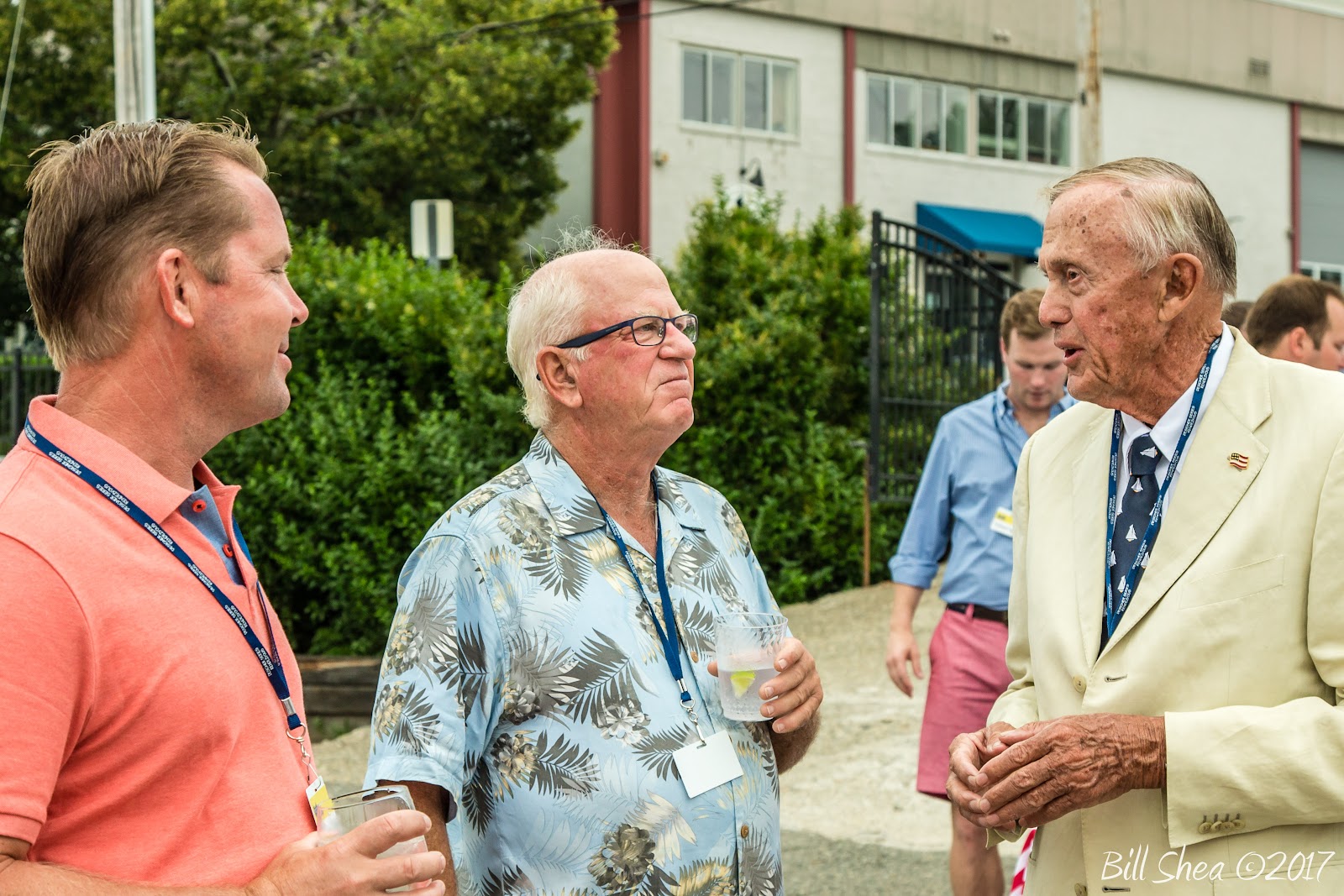 Halsey Herreshoff talks with Andy Tyska and guests during the cocktail hour before the clambake. Photo: Bill Shea 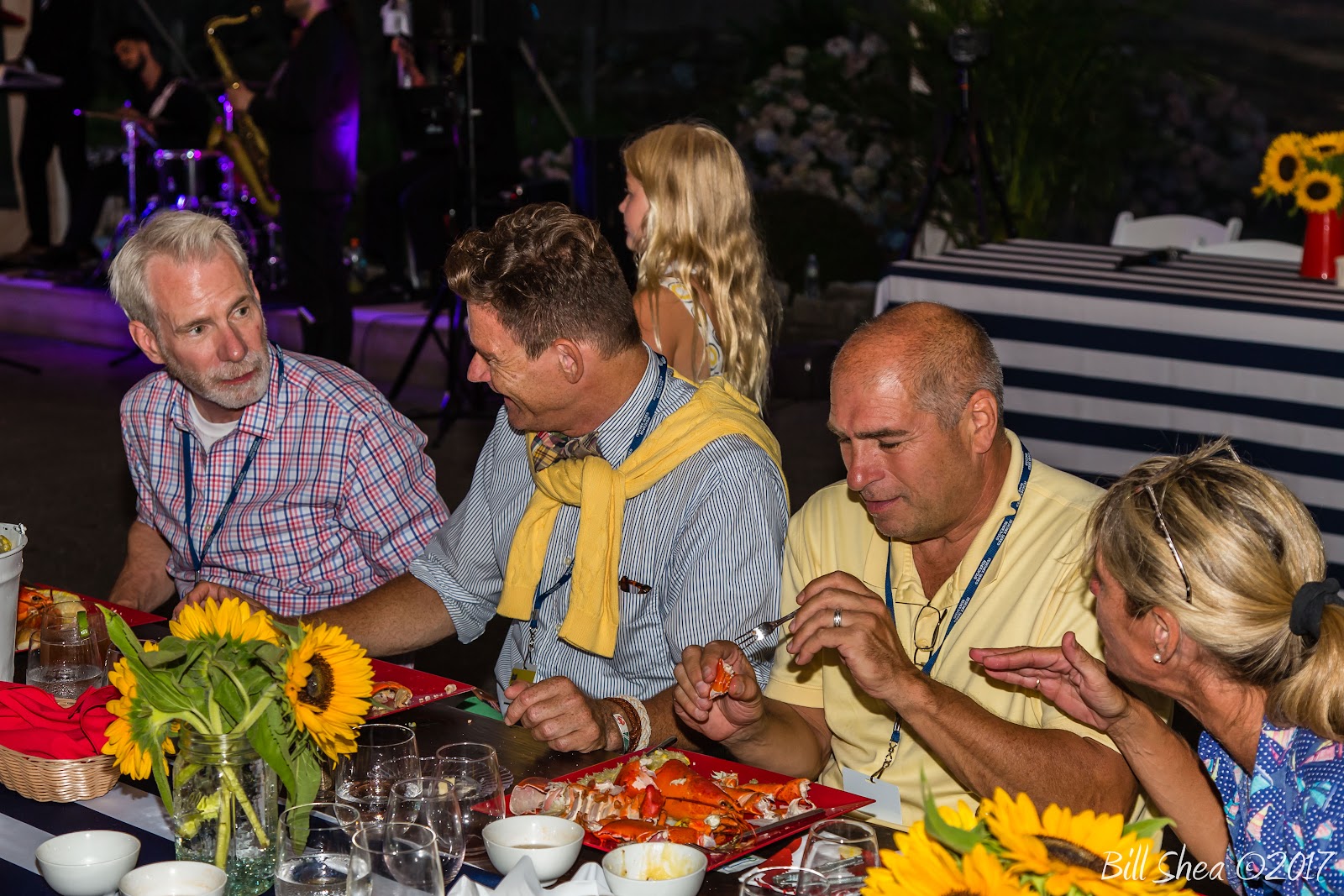 Sunday morning sailors and guests gathered under the tent for a casual breakfast and the stories continued. “It was a truly memorable weekend honoring my dad!” said Nancy Hood-MacLeod.  “Last night was very special and I will never forget being a part of it,” said Susan Glendening, owner of a Little Harbor 42, Halcyon.

For one last time, owners left the docks to participate in a boat parade through Bristol before heading back to their home ports. Lined up from oldest to newest, Robin followed by Nefertiti sailed by the docks and into the harbor.

“This is such a special sight,” said one Bristolian who biked down to watch the parade. “Will they be back next year?”

Next year, the Designer Series Rendezvous plans to travel down the Bay to Newport to honor another designer, to be announced in Fall 2017.

“I believe we have found a formula that works,” says Andy Tyska, president of Bristol Marine who is one of a team of individuals spearheading this new series. “We are already working on planning for next year and hope to invite more boats and the public to take a weekend to appreciate all the hard work that goes into yacht design and the marine industry.” 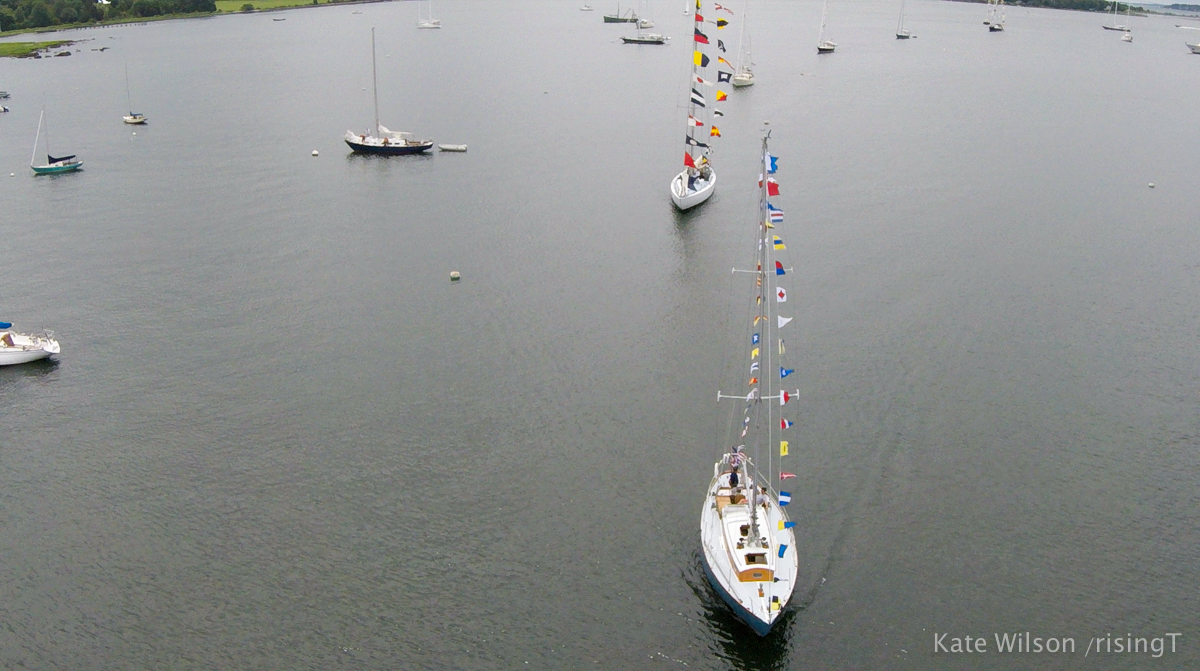 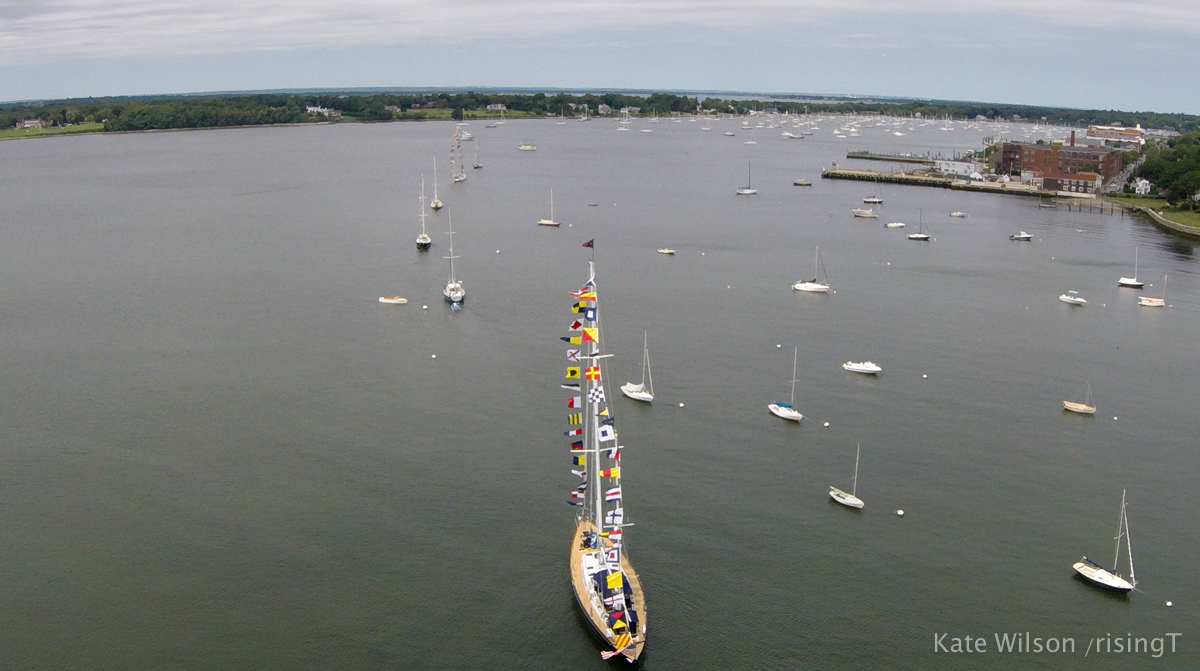 This event is also created to do more than celebrate iconic designers: it is also about looking to the future and cultivating the Ted Hoods of tomorrow.

A new Designer Series Scholarship of $3,000 will support an individual who is pursuing a career in recreational yacht design or marine engineering, service or construction. Students studying at a trade school or an institute of higher learning can apply for this funding.

Individuals who wish to apply for the scholarship should visit  designerseries.org/2017/scholarship. The application deadline has been extended to September 1.

For more on the Designer Series Rendezvous, please visit the event’s website at designerseries.org.